The Glen Rock Police Department was established in 1918 to provide full time law enforcement services to the Borough of Glen Rock, located in northwest Bergen County, New Jersey. At the time of the department’s inception, Glen Rock was a small agrarian community of approximately 4,000 people.

Between 1894 and 1918, part-time “Marshals” were hired by the community to provide law enforcement services. Often referred to as policemen, these marshals had no training and were issued only a handgun, nightstick and badge. They were called to duty as needed and were paid for any arrests they made. The Chief Marshal was Martin A. Jensen.

On September 1, 1918, the Glen Rock Police Department was formed with the appointment of its first full time police officer, James R. Houlihan. A former Village of Ridgewood, NJ policeman, Mr. Houlihan was named as Chief of Police and patrolled Glen Rock on a bicycle. He also used trained police dogs to locate missing persons and deter crime, a concept the department re-instituted in between 1993 and 2000. 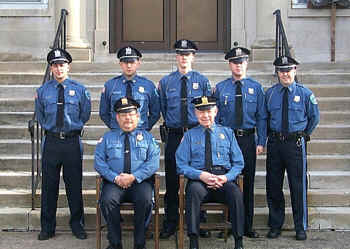 The first police car was purchased in 1923, assisting the officers who patrolled the borough on foot and on Motorcycle. At that time, no police radios existed, and officers communicated by using telephone “call boxes” which were located at various points throughout the town. By 1928 the department had grown and now included seven officers. This number would remain constant through the 1940’s.

Shortly after the beginning of World War II, a volunteer auxiliary police force was established to augment the full-time police department. The Glen Rock Auxiliary Police acted as additional eyes and ears for the police. These auxiliary officers provided the borough with secondary patrols, and were available for emergencies, disasters, and public events requiring crowd and traffic control. Many of those who served as Auxiliary Police Officers went on to become full-time Police Officers both locally and as far away as Mesa, Arizona. Due to ever increasing training requirements, which were

in many cases equal to that of regular officers, the auxiliary police program ended in 2012. In 2017 Special Police Officers were added to the ranks of the GRPD to replace the Auxiliary Police.  These paid officers have far more training and are vested with limited police powers.  They are utilized for foot patrols in the Central Business District, parking enforcement, traffic control, additional community patrols and crowd control at town events.  These special officers fall under the supervision of the police department’s traffic safety bureau, they have full authority to issue traffic summonses, enforce police related borough ordinances and make arrests for offenses committed in their presence.

As Glen Rock grew and changed, so did its police department. In 1946 a two-way radio system was installed in police headquarters as well as the department’s patrol cars. This dramatically increased the police response time to the growing number of calls being received each year. As the day-to-day needs and problems of the community increased, so did the demands placed upon the police force. Increased training, additional manpower and better equipment soon became necessary. During the 1950’s, society began to recognize the need for specialized police training and Glen Rock police officers began attending formal programs conducted by the FBI, State of New Jersey, and Bergen County. This type of formal training became mandatory for all police officers throughout New Jersey in the 1960’s, and during the next decade officers began seeking college degrees in criminal justice, public administration and psychology. Today, anyone wishing to become a Glen Rock police officer is required to have a college background.

Throughout the 1950’s, 60’s, and 70’s, manpower and equipment began to improve. More police vehicles were purchased, and new lifesaving equipment accompanied officers on patrol for the first time.

During the 70’s, the department grew to twenty-six sworn, full-time police officers. Radar equipment for speed enforcement, and hand-held portable radios for more effective communications were placed into service.

In 1984, Glen Rock was one of the first police departments in Bergen County to issue semi-automatic 9mm handguns to its officers.  For safety reasons officers’ duty weapons are replaced approximately every ten years and are regularly inspected by in-house personnel who are certified as Glock Armorers.

As information system technology began to emerge during the 1970’s, the Glen Rock Police became involved in a countywide movement aimed at computerizing criminal records as part of a larger federal program.

During the late 1980’s, an in-house computer-based record-keeping system was implemented. This concept continues today, with officers from the department’s Information Technology division, who have aided in both design and maintenance of our current local and wide-area network systems. In April of 2002 the Department replaced its long outdated MDT, in-car computer system and purchased Mobile Data Computers. In later years these computers were upgraded to rugged lap-top terminals.  This state-of-the-art system placed the department at the forefront of the technology curve. The specialized, touch screen computers allows officers on patrol instant access to FBI criminal and wanted person files, as well as several other state and countywide law enforcement databases, including New Jersey motor vehicle records. This system has resulted in the detention of numerous wanted persons and other violators found on the streets in our community.

Today all police vehicles assigned to routine patrol functions are equipped with Mobile Data Computers in the form of Panasonic “Tough Books”. Officers on patrol can write basic initial reports in their vehicles and submit them over a wireless network, thus keeping them on the street where they are needed. Even Traffic Summonses can now be generated electronically and immediately transferred to the Municipal Court directly from the patrol car. Officers in the field also have the ability to search the department’s in-house data base for local alerts, premise histories, prior reports and field contacts instantly from their vehicles. They can also communicate with and transfer information to other officers and agencies throughout the region. Currently, the Glen Rock Police Department consists of twenty-three full-time police officers, four special police officers (SLEO 1) and two part-time police administrative assistants who maintain the police records and reception desk during limited hours.  Sworn police personnel are divided into three divisions, consisting of a patrol division, traffic safety and a detective bureau. The command staff presently includes the Chief of police and two Lieutenants. There are four patrol Sergeants, one traffic safety Sergeant one Detective Sergeant and one Detective. Several of our officers also provide specialized services including, traffic safety, juvenile officer, community outreach, domestic violence investigation, law enforcement accreditation, certified car seat technicians, computer and information technology services, records management, as well as firearms training and radar instruction, in addition to their normal patrol assignments. Glen Rock is the only police department in the State of New Jersey to have a police officer who is also a licensed mental health professional (LMSW).  Several officers have been certified in “train-the-trainer” programs allowing the department to expand the use of in-house training during regular working hours.

In 1994 the Glen Rock Police Department closed down an antiquated police dispatch desk and moved Police dispatch and 911 services to a regional dispatch center, the NorthWest Bergen Central Dispatch located in Ridgewood, NJ. This center is the primary point of contact for all emergency and non-emergency calls to Glen Rock’s public safety services. 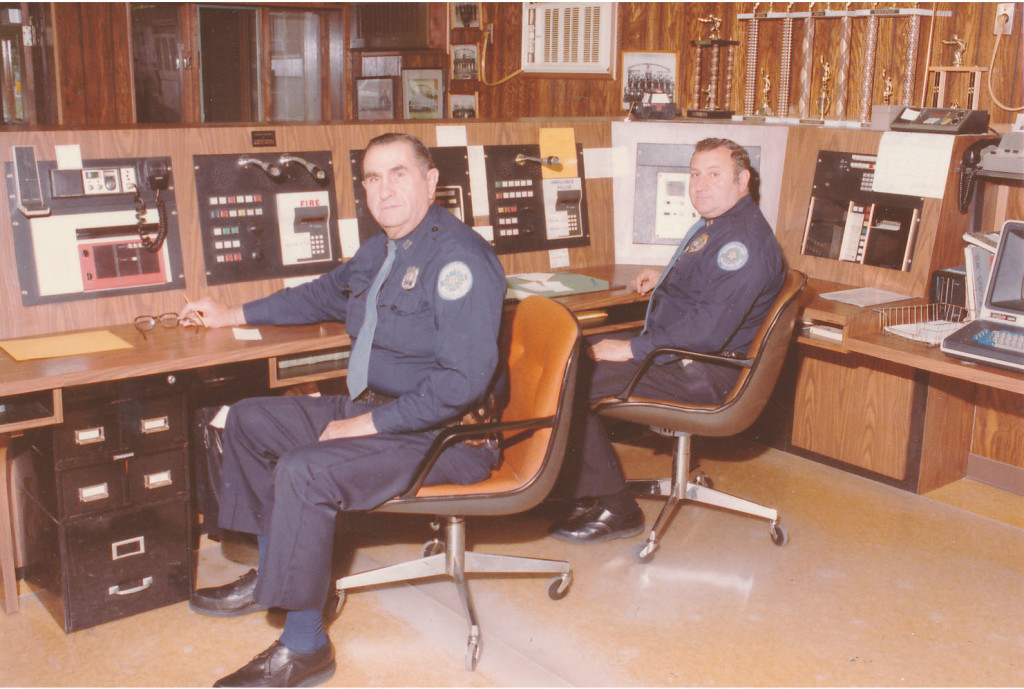 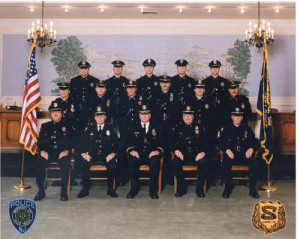 In January 1999, the department instituted an enhanced emergency medical program under which all members of the patrol force were trained in the use of portable cardiac defibrillation units known as AED’s. These units were obtained through a project developed by the Hackensack University Medical Center, Hackensack, NJ, and are used by trained personnel to start the heartbeat of a person suffering from cardiac arrest.

Today many of the Glen Rock Police Officers on patrol are also certified as Emergency Medical Technicians (E.M.T.’s). One officer is also a fully certified paramedic.

Having out grown its former substandard facility at old Borough Hall, the Glen Rock Police Department, along with other Borough Offices, moved into a temporary Police Headquarters at 175 Rock Road behind the CVS in 2007. The department operated out of this location until January of 2010 when operations were moved back to a newly renovated and state-of-the-art police facility at the Harding Plaza Municipal Building.

In 2011 the department’s Motor Cycle Unit was re-instituted. The department currently has two motorcycles, which get about 40 miles to the gallon and are equipped to respond to all calls handled by patrol cars. In addition to the standard police radio, the unit is equipped with a radar unit, e-ticket printer, oxygen, defibrillator, first aid gear, flares, police line tape and flashlight. It is outfitted with a siren and all required emergency lighting as well as a laptop computer similar to those used in borough police cars but designed for use on police motorcycles. The motor cycles are on patrol 12 months a year except during extreme weather conditions. 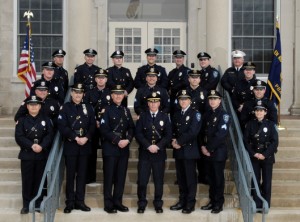 Maple Glen 1954 Looking North on Maple Ave from Glen Ave. toward the railroad overpass -Circa 1954 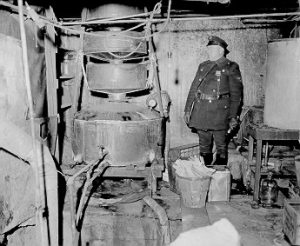 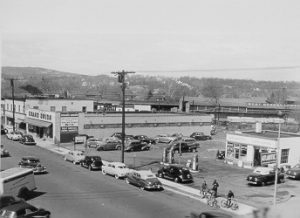 The Central Business District at Rock & Glen Circa 1955 (Looking Northwest) Notice the Foot Officer in the foreground with the bicyclists?

Glen Rock Municipal Complex – 1957 The Glen Rock Municipal Complex in 1957 that is home to the Borough’s government offices as well as the police department. To the right and behind the building is where the fire headquarters would be built. Also visible in the photo is Kilroy’s Market (middle left), the former White’s Garage (Now Kilroy’s warehouse in the upper center) and the Esso gas station (now Maple Rock Exxon in the very top of the photo) 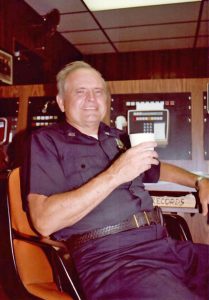 Ptl. Frank Kozar in old dispatch area 1981, just prior to his retirement 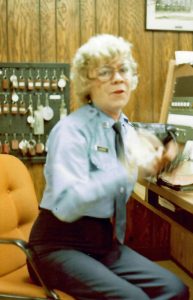 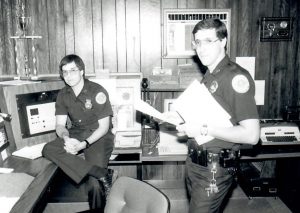