A general definition of burglary is when someone unlawfully enters an establishment with the intent to commit a crime, i.e. theft. 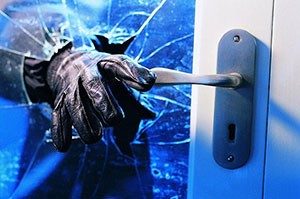 Ninety per cent of burglary prevention is physical security. If your home is locked up and unauthorized entry is made difficult, time consuming, noisy and visible, chances of a successful burglary are kept to a minimum. The burglar will pass up your home or business and look for an easier target.

When attempting to improve the security of your property, think like a criminal and go over your entire store or home in fine detail, looking for any means of entrance or criminal opportunity.

LOCKS on all outside entrances and inside security doors should be double cylinder deadbolts with moveable collars. The deadbolt should have at least one inch throw containing a hardened steel insert and protected by a latch guard. Check with the Fire Marshall for safety requirements.

PADLOCKS should be of hardened steel, mounted on bolted hasps and always locked to prevent exchange. Serial numbers should be filed off to prevent new keys from being made.

DOORS (all outside or security doors) should be of solid construction, metal lined and secured with heavy metal crossbars. Jams around doors must be solid. All exposed hinges should be pinned to prevent removal.

WINDOWS should have secure locks. Burglar-resistant glass treatments are also recommended. An example would be the installation of polyester security film. However, this must be used in conjunction with the alarm’s glass break sensor. Heavy metal grates may be used on windows of high vulnerability (such as rear windows). Check with the Fire Marshall for safety requirements.

LIGHTS must provide optimum visibility, both inside and out, with those outside having vandal-proof covers over the lights and power source.

At HOME, CREATE THE ILLUSION SOMEONE IS INSIDE

Use timer controlled or motion detector lights and have a radio or a television on a timers to make it appear as if your house is occupied. Avoid clues that might tip-off a burglar that you are away, even for one evening. Arrange for the collection of mail and newspapers. Have neighbors park a car in your driveway, and keep some blinds or shades open (preferably on the second floor) to give the appearance that everything is normal.

ALARM SYSTEM should be supplied by a licensed alarm company with a central monitoring station. Check the alarm system on a daily basis, and advertise its presence to deter break-ins.

CASH REGISTER should be kept in plain view from outside the building so it can be easily monitored and should be left open when empty and not in use.

SAFE should be fire proof, burglar resistant, anchored securely. Most importantly, remember to use it to lock up valuables when business is closed or when you will be away. Make sure it is locked and if it is your business safe, remember to change the combination whenever someone with access to it leaves your employment.

SAFEGUARD YOUR VALUABLES Engrave jewelry, watches, televisions and other portable items with your social security number or other identifiable label. Consider storing valuable jewelry and cash in a bank safe-deposit box, or a hidden safe inside your home. Most burglars go directly to the master bedroom looking for jewelry and other small items.

BUILDING EXTERIOR should be checked including the roof, cellar and walls. Secure all openings. If there are shrubs around your house, think about trimming them so the will not block clear visibility of your windows.

MAINTAIN GOOD VISIBILITY by not allowing landscaping, boxes, trash bins, vehicles or equipment near building where they might provide concealment or access to the roof.

PERIMETER FENCES need to be adequate enough to keep intruders out, and at the same time allow good visibility of your business by neighbors and police (i.e. vertical iron bar fence or 1/8 inch mesh vinyl coated chain link).

KEY CONTROL should be done in a responsible manner. A master key system where one key opens all locks may be convenient, but it may not be the best for security. Code all keys, keep them locked up when not in use, and do not allow employees to leave them lying around or make duplicates. Change locks whenever you suspect key security has been jeopardized.

SECURE equipment and merchandise in order to delay a burglar in his attempt to clean you out in a hurry.

PUT YOUR HOME ON THE POLICE DEPARTMENT’S VACANT HOUSE LIST.

As part of our community service programs, the Department maintains a voluntary listing of all vacant homes in the Borough. Whether your away for the weekend or for six months, you can call the Department and request that your home be added to the Vacant House List.

In addition to providing the telecommunicator with your local information, please be ready to provide them with the dates that you will be away, a contact number or location you can be reached (if possible) and several local contacts who would have access to your home or can contact you, in case of an emergency. Also it is helpful for us to know if you have someone in and out of your house to care for plants or animals, if there are lights on timers, cars in the driveway and if there is an alarm.

If you DISCOVER a Burglary to your Home or Business

You do not want to walk in on a burglar. Although they usually do not want, or look for a confrontation, however if cornered, he or she may become violent. If you arrive home or to your business and find a smashed window or kicked in door and have any reason to believe that an unauthorized entry has been made, then proceed as follows:

Any unknown persons, vehicles, or unusual activity in your neighborhood should be reported to the police as soon as possible. Always try to obtain as much descriptive information about the person (i.e. gender, clothing description, build, etc.) or vehicle (i.e. plate number, color, make, model, description of occupants) as you can, without alerting possible suspects.

If you have any questions or concerning crime prevention strategies please call the Glen Rock Police Department at (201) 652-3800 or E-Mail us at CRIME-TIPS If you observe anything suspicious or have an emergency, dial 9-1-1 immediately.

A few years ago the entire Northern New Jersey area was plagued with transient burglars, commonly referred to as “gypsy burglars” and Glen Rock was no exception. The term gypsy is defined as: “to live or roam like a Gypsy.” These roaming thieves were well known for their brazen burglaries of our residents. The burglars consist of numerous individuals, usually “extended family” members, who walk through the neighborhoods looking for “easy” targets, oftentimes preying on the elderly. At the time, through the efforts of many, these individuals were identified. Some were arrested, and most left the area.

Recently our area has experienced a few burglaries in which detectives believe the actors are members of these roaming groups. Their M.O. (modus operandi) includes, but is not limited to the following:

They will drop off one of their people, usually a female, who walks the neighborhoods. She will approach a home and try the doors. If she locates an unlocked door, she walks in and begins her search for valuables. If she runs into anyone in the house, she will apologize for being in the “wrong house”, and explain that she was looking for a friend.

They will work in pairs, with one person approaching the front door of a home. While this person is distracting the home’s occupant, the second person enters the home from the rear and begins to search for valuables. They will also ask to use the phone, and again while in the home, one person will distract the occupant while the other slips away to steal valuables.

Another way they apply their trade is when they pose as utility workers, exterminators, or repair people, and while one is distracting the home’s occupant, the second is stealing.

In almost all cases there is an accomplice nearby, generally down the street, in a vehicle. This person is there to warn of approaching police with a pre-arranged signal, and to provide a getaway vehicle after the theft occurs.

By far, these are not the only burglary groups that operate in our area. In addition to the “gypsy burglars,” Glen Rock officers and detectives are constantly kept informed of the different groups or individuals that have been know to target our area. When information about a new actor or group is developed it is passed onto patrols through the Departments’ Patrol Alert Sheet. Of course it is almost impossible to track, or even be aware of, all the new or changing groups or individuals. Some are just “locals” looking to get some extra money.

We are here to help, but as we have said before, we can’t do it alone. Please call us any time you see anything unusual.